Our world is losing ice at a record rate – EarthSky

Our world is losing ice at a record rate – EarthSky

Originally published by the European Space Agency (ESA) on January 25, 2021.

A research team – the first to carry out a survey of global ice loss using satellite data – has discovered that the rate at which ice is disappearing across the planet is speeding up. The findings also reveal that 28 trillion metric tons (tonnes or 31 billion U.S. tons) of ice was lost between 1994 and 2017, equivalent to a sheet of ice 330 feet (100 meters) thick covering the whole of the U.K. (approximately the size of Michigan or Wyoming).

A paper, published on January 25, 2021, in peer-reviewed The Cryosphere, describes how a team of researchers led by the University of Leeds in the UK used information from ESA’s ERS, Envisat and CryoSat satellites as well as the Copernicus Sentinel-1 and Sentinel-2 missions to find that the rate at which Earth has lost ice has increased markedly within the past three decades, from 0.8 trillion tonnes per year in the 1990s to 1.3 trillion tonnes per year by 2017.

To put this into perspective, one trillion tonnes of ice can be thought of as a cube of ice measuring 6x6x6.miles (10x10x10 km), which would be taller than Mount Everest. 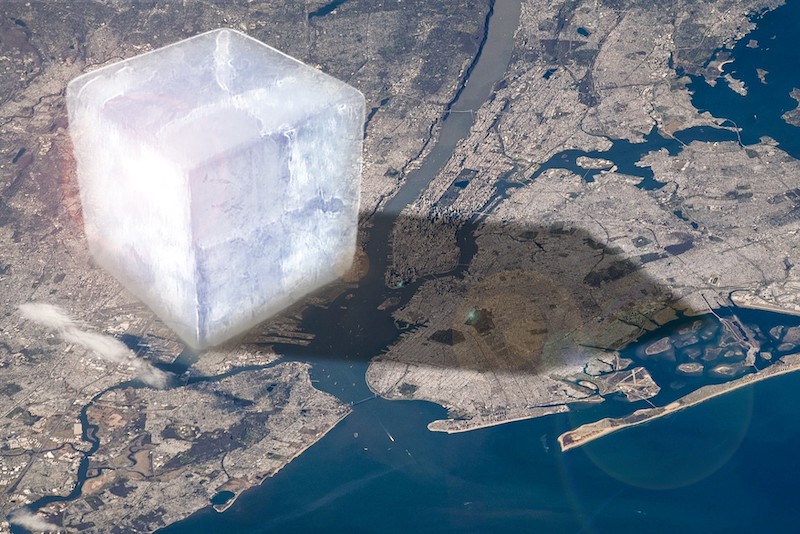 The research shows that overall, there has been a 65% increase in the rate of ice loss over the 23-year survey. This has been driven mainly by steep rises in losses from the polar ice sheets in Antarctica and Greenland.

Ice melt from ice sheets and glaciers raises sea levels, increases the risk of flooding in coastal communities, which has severe consequences for society, the economy and the environment.

Although every region we studied lost ice, losses from the Antarctic and Greenland ice sheets have accelerated the most. The ice sheets are now following the worst-case climate warming scenarios set out by the Intergovernmental Panel on Climate Change. Sea-level rise on this scale will have very serious impacts on coastal communities this century.

The study is the first of its kind to examine all the ice that is disappearing on Earth, using satellite observations.

The survey covers 215,000 mountain glaciers spread around the planet, the polar ice sheets in Greenland and Antarctica, the ice shelves floating around Antarctica, and sea ice drifting in the Arctic and Southern Oceans. 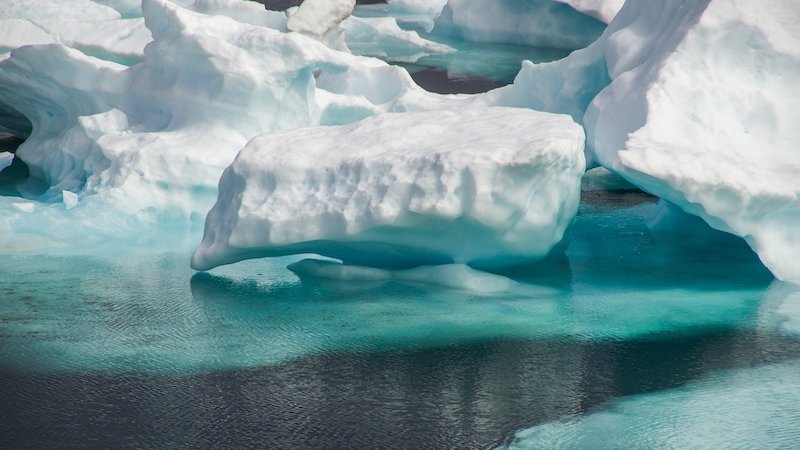 Our world is losing ice at a record rate. Image via ESA.

Over the past three decades there’s been a huge international effort to understand what’s happening to individual components in Earth’s ice system. This has been revolutionised by satellites as they allow us to routinely monitor the vast and inhospitable regions where ice can be found.

Isobel Lawrence, also a research fellow at the Centre for Polar Observation and Modelling, said:

Sea-ice loss doesn’t contribute directly to sea-level rise, but it does have an indirect influence. One of the key roles of Arctic sea ice is to reflect solar radiation back into space, which helps keep the Arctic cool. As the sea ice shrinks, more solar energy is being absorbed by the oceans and atmosphere, causing the Arctic to warm faster than anywhere else on the planet.

It is estimated that for every centimetre of sea-level rise, approximately a million people in low-lying regions are in danger of being displaced. 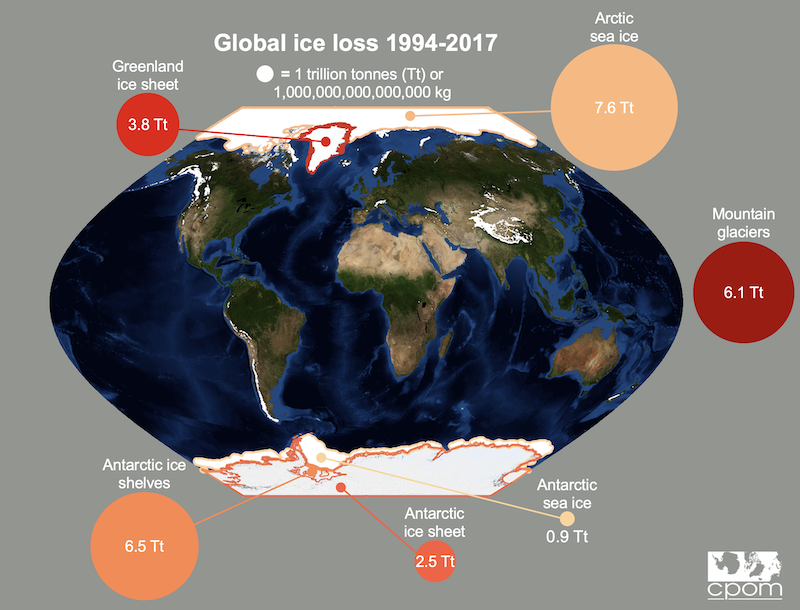 This diagram shows the ice loss, with each circle scaled to the amount of trillion tonnes, that has been lost during the time range of observation. Image via ESA.

Despite storing only 1% of Earth’s total ice volume, glaciers have contributed to almost a quarter of the global ice losses over the study period, with all glacier regions around the world losing ice.

As well as contributing to global mean sea-level rise, mountain glaciers are also critical as a freshwater resource for local communities. The retreat of glaciers around the world is therefore of crucial importance at both local and global scales.

The tap to the vast global icy reservoir has been well and truly opened by global warming. Continuity in satellite data is the key to predicting future ice losses, and to assist in mitigating the threats posed by sea-level rise, shrinking high mountain glaciers and further climate feedbacks. The Copernicus Expansion missions, CRISTAL, CIMR and ROSE-L have been designed to fill the gaps in current Sentinel capabilities for comprehensive monitoring of changes in the global ice cover.

Bottom line: A research team using data from European Space Agency satellites reports that the rate at which ice is disappearing across the planet is speeding up, with a 65% increase during the 23 years surveyed.