European soccer players may have up to 3.5 times higher risk for COVID-19 – News-Medical.Net

European soccer players may have up to 3.5 times higher risk for COVID-19 – News-Medical.Net

The onset of the coronavirus disease 2019 (COVID-19) pandemic has brought most large public events and gatherings to a prolonged halt. Among these are sporting events such as the European soccer series, games which obviously cannot be played while adhering to social distancing recommendations. As efforts are underway to keep the season going under existing restrictions, a preprint research paper appearing on the medRxiv* server describes the estimated incidence and the risk of infection with the severe acute respiratory syndrome coronavirus 2 (SARS-CoV-2) among European soccer players. 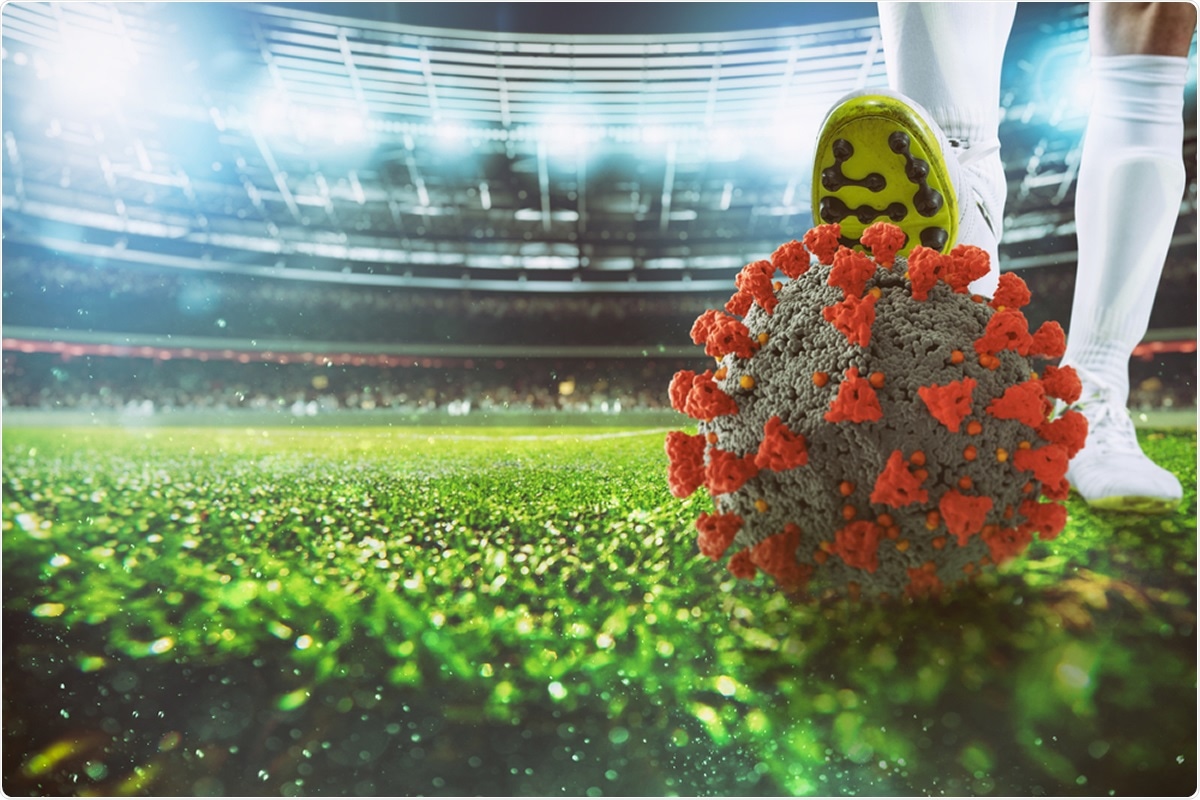 Several earlier studies showed that there was a negligible risk of viral spread during soccer matches. This led to the playing of many matches, both for leisure and as part of the professional season, during the latter part of the spring and in the summer.

In the recreational variety of soccer, only a restricted number of people were allowed to train together or indeed play at the same time. Changing rooms and showering facilities were also off-limits to more than the prescribed number of people, as off-field social distancing was also underlined.

In professional soccer, protocols were drawn up to ensure that the season would be a safe one. In the UK, for instance, the Department for Digital, Culture, Media & Sport produced one such set of guidelines. Players and staff were tested once or more each week to prevent infection of the group of players. This would obviate the need for social distancing within this group inside the club. It is noteworthy that the minimal frequency of testing to prevent the virus’s entry into a limited group is currently unclear.

Therefore, the current study attempted to analyze the incidence of SARS-CoV-2 infections in this group of players and compare it to that of the population at large.

The researchers included top leagues from England, Sweden, Denmark, Germany, and Russia. The analysis period was from the start of the season until January 2021, except for Russia, where it extended from April through September 2020. The selected countries had abundant data on the number of players who participated in the matches, training, and the number of staff, as well as on the number of infections, during this season.

Population data were obtained from the European Centre for Disease Prevention and Control (ECDC) website. The researchers calculated the incidence as the number of positive tests divided by the population, as well as an estimated incidence drawn from an infection-fatality rate of 0.35%.

The relative risk (RR) was calculated from the incidence.

Incidence in players and population

The researchers found that the incidence in soccer players varied between 9% in Germany to 14.5% in Russia, compared to a population incidence of 0.75% to 2.6% in Russia and Denmark, respectively. In Denmark and England, the incidence hovered around 10%, while it was ~13% in Sweden.

The population incidence in England and Germany was 1.8%, but it was ~2.5% in Sweden and Denmark.

The relative risk in the soccer players was thus between 2.85 and 17, being in all cases greater than 1. The highest RR was highest, at ~17, in Russia, moving downward through 5 and 4.7 in Sweden and Germany, to 3.6 and 2.85 in Denmark and England, respectively.

Based on the estimated incidence, the estimated RR was much lower, ranging between 0.9 and 1 in England and Germany, through 1.7 in Sweden, to 2.56 and 3.5 in Denmark and Russia. In other words, the risk of contracting SARS-CoV-2 infection in the group of soccer players was higher, compared to the general population risk, in the latter three countries.

What are the implications?

The number of infections in the population can be estimated in any of several methods. The current study used the infection mortality rate because of its relative fixity. When comparing positive tests from soccer players in top-league soccer to the national incidence, it is important to note that positive tests are non-uniformly distributed through age groups.

The most significant number of positive tests is in people aged between 20 and 29 years. This is the group to which most soccer players belong as well. Since this group is likely to test positive far more often than other age groups, or the whole population, the risk of infection in footballers is likely to be represented in an exaggerated fashion, compared with the community at large.

The reason for high infection rates in footballers despite frequent testing could be either because the rate of testing is still not high enough or because the virus spreads before the test becomes positive.

The researchers conclude with a quotation from the Guidance for Elite Sport in the United Kingdom: “All individuals must abide by government and PHE guidelines whilst away from the Competition Venue.” This appears to be the best way to avoid introducing infection into a soccer group and differs little from the recommendations to the general population.

medRxiv publishes preliminary scientific reports that are not peer-reviewed and, therefore, should not be regarded as conclusive, guide clinical practice/health-related behavior, or treated as established information.